I have done a bunch of briskets now, and I really am only getting better at making them!  Briskets can be a touchy thing to smoke.  Here are the tips I have learned over the years so maybe they can help you out with your Brisket smoking endeavors.

I buy my briskets at my local grocer Coborns.  I walk up to the meat department and ask them for a untrimmed brisket.  They usually have trimmed ones in the case, but there is very little fat cap and that is a important part of the smoking process.  When they bring the untrimmed briskets over to me, the first thing I check is the fat cap.  You want a nice cap over the top, but you don’t want it to ridiculous.  The second thing I do is bend the cut of meat.  If it folds up super easy, almost like a bag of soup, you have a tender brisket.  If there is a bunch of resistance, it isn’t that tender and move on to another one.

I open up the pack, and check out the fat cap.  If it is to thick, I trim it down a little.  I don’t like to go to much over a 1/2″ of fat the top.  I take my knife and I criss cross pattern score the fat down to the meat.  That way, your rub will make it through the fat.  Now that its scored, its time to throw on your rub.  Here is what I used for a rub

I start by spritzing Worcester sauce over the brisket and rub it around.  Then I take all the seasonings and mix them together.  Once they are mixed, I rub the brisket all over and really cake it on.  There is no such thing as to much rub.  I rub the first half, and throw it onto some cellophane.  I rub the other side, and I finish wrapping the brisket in cellophane. 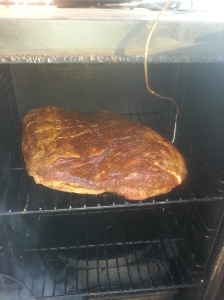 I like to start my Brisket early in the morning.  I turn the smoker on to 235 degrees at around 6 am and throw the brisket on the smoker, fat cap side up, around 7 am.  I always shoot for roughly 1 hour per pound.  The goal is to hit a internal temp of 190 degrees.

When you cook at this low temp, there is a chance that the brisket will stall out around 160 degrees.  Almost like it hits a wall.  It could sit around 160 for a couple hours even, and then it will take off again.

Another thing I have learned about smoking at this low temp is a thing called evaporative cooking.  Basically this means that the temp of the meat internally won’t rise up until the surface of the brisket is dry.  I made the mistake of mopping my brisket one time and the temp never went up.  I couldn’t figure it out.  The reason was that i was negating everything I was doing when the door was closed by wetting down the surface. 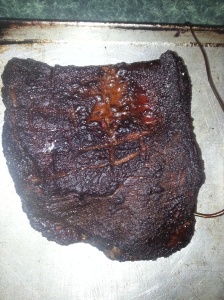 So, you have gone through the waiting process, your 6 hour wait is done, the internal temp is 190.  Now what?  This is a step that I have recently started doing.   I bring the brisket in, and wrap it up tightly in tin foil.  Then I wrap it in 2 large towels.  Then, I throw it into a cooler for about 2 hours.  This gives the meat a chance to firm up a little, and get just a little more tender.

After it sits for a couple hours in the cooler, I pull it out, unwrap it and grab my 14″ Wusthoff Brisket knife and start trimming off any unnecessary fat.  There shouldn’t be to much.   I then start to slice the brisket as thin as I can with the knife.  With a sharp knife, you can get that sucker pretty thin.

We used the Brisket on Christmas Eve for some sandwiches, and we used the rest of the brisket Christmas Day with some brown gravy and mashed potatoes!  Super awesome.

The one thing I didn’t do with this Brisket that I normally do is Burnt Ends.  I will talk about doing that next time!

I used my masterbuilt electric smoker to cook the brisket and the photos were taken with my Samsung Note 2.